Hemorrhoids are an irritating but common occurrence for many people.

However, certain foods can help relieve symptoms and even prevent the development of hemorrhoids. 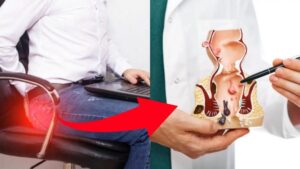 Fruits contain fiber and flavonoids that help control bleeding from hemorrhoids. The flavonoid is often called vitamin P, and most of it is found in berries, such as blueberries, raspberries, and even more of the needed fiber can be obtained by eating the skin of the fruit – something you can do with apples, oranges, and even kiwi and mango.

Walnuts have strong anti-inflammatory properties, which can reduce swelling of the tissues where you have had hemorrhoids. Almonds and walnuts are especially high in fiber. A serving of 20 almonds has about 3 grams of fiber. In addition to contributing to the health of the intestinal microflora, the consumption of this food can also reduce bad cholesterol, which is one of the symptoms associated with old age, along with hemorrhoids.

Sweet potatoes, beets and carrots are high in fiber and especially gut-healthy. Potatoes are one of the best foods to get rid of internal and external hemorrhoids. Boiled potatoes contain starch that has the property of resistance, acts through soluble fibers and thus reduces constipation, which also relieves the symptoms of hemorrhoids.

Celery, cucumbers and artichokes can also be used to relieve symptoms.

Seeds are a very useful food because they can be included in any dish. They can be sprinkled on a salad, in a smoothie or even on yogurt.

Whole grains are especially rich in insoluble fiber, which can help reduce pain and discomfort. In addition, they also contain a number of vitamins and minerals, which is why daily consumption is recommended.

In addition to whole meal flour, which is definitely a better alternative than white flour, this category also includes barley, corn, and oats. Oatmeal is an especially good option when trying to reduce hemorrhoid symptoms. Whole grains to avoid are pasta and rice.

What foods should you avoid if you have hemorrhoids?

It would be better to reduce foods that contain little fiber:

It is also recommended to avoid spicy foods. Although not necessarily low in fiber, spicy foods can increase the pain and discomfort associated with hemorrhoids. Liquids include alcohol and coffee, as they can further harden your stool and worsen the discomfort of hemorrhoids.

Banana, make you fat or thin?

The natural way to lose weight in two weeks